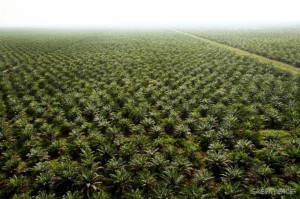 c2610073 – 26th October 2007. KUALA CENAKU AREA, RIAU PROVINCE, SUMATRA, INDONESIA.
The aerial shot taken from a helicopter, shows a palm oil plantation near the Greenpeace Forest Defenders Camp. The Forest Defenders Camp opened on the 9th October as part of the organisations campaign to stop forest and peatland destruction caused in part by oil palm plantations. The destruction is causing massive amounts of biodiversity loss and releasing huge amounts of greenhouse gasses to the atmosphere.

In the short-term, prior to the December 2007 Kyoto Protocol meeting in Bali, Greenpeace is calling on the Indonesian government to commit to a moratorium on conversion and destruction of Indonesian peatland.